Jesus Goes Up to Jerusalem

Insurrection In The Temple

And Yesua went early unto the Mount of Olives to pray and when he returned he came unto the temple, and the people gathered unto to him; and he sat to teach them. And as it were, the Scribes and the Pharasees brought unto him a woman accused of adultery and fornication , and when they had set her down on the ground in the midst of them they saith unto him: “Rabbi, this woman was taken in adultery, and caught in the very act. Now according to the law of Moses, it is commanded that we are to stone her unto the death with stones. And what saith ye we are to do with her?”  And Yesua stooped down as though he had heard them not, and with his finger began to draw the image of a certain house with arches known to all on the outskirts of Jerusalem and then did he their own names inscribe into the wet clay. And as they gazed upon what was graven there, and their eyes were opened wide and their mouth left hanging , he stood up and saith unto them ,“Let he who is without sin among you , cast the first stone.” And Yesua again stooped down and as he continued to write each name , from the eldest unto the last they went out one by one with their heads bowed in shame. And Yesua then raised himself up and seeing that they were now left alone , saith unto that woman,  “ And where are those thine accusers? Hath no man condemned thee?”  And the woman answereth unto him,  “Rabbi, of those whom hath made haste in parting from this place ; surely thou knowest that they have in secret spent lavishly on me and that yet even they would condemn me. How is it then that thou who hath the power of life and death over me , and who art both a righteous and pious man would see to treat me thus kindly?” And Yesua answereth unto her “I could only spend of that which was in my own purse!” And so Yesua raised her up from the mud saying,  “Since there is none here that would condemn thee woman ;  behold ! There Yonder Thine daughters await thee! Go in peace now and sin no more!” 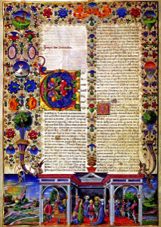 Donations are just about the